Want to Build Mobile App For Your Business? Let's Discuss

In this tutorial, I am going to show you some of the Best Flutter development tools available in the market which will help you to make  Development Productivity Faster and Build Better Applications. Flutter is a Framework from google for Creating Cross-platform mobile apps.

Flutter is a Google UI Framework for Developers to Create Native applications for Mobile, Web, and Desktop Just in a Single Codebase. Flutter is Used by Millions of Developer Worldwide to create beautiful UI for their applications.we’ll look at some of the Best flutter development tools that can greatly improve your workflow and help you reduce development time.

Okay Without wasting any time. Let’s start in and Discover lots of New & awesome Flutter tools to develop your flutter apps like a legend.

Panache will help you to create beautiful themes for your flutter apps, you can customize colors & shapes in the apps.

Appetize is an Online web-based android Emulator and iOS simulator. Appetize will run Native mobile Apps in the browser with HTML and Javascript. which is easy to maintain and tacks.

TestMagic is a Free Companion app just like Codmagic for Fast & Easy testing of your android and iOS builds. Testmagics helps to distribute your builds and Testing android and Ios Apps on real devices as well as provide Feedback to your projects.

A screenshot is a command-line utility for capturing Screenshots into the status bar placed in the device frame. Screenshots can be integrated into flutter to work transparently into Android and iOS.

Supernova Recently Introduced Support For Flutter Platform in Flutter interact. Supernova is a tool that helps you to Generate UI Code for Flutter. it’s support for material Design widgets a style manage that can bring the concepts of token and style into a flutter, you can have flutter app running side by side with Supernova and Change happen real-time.

Supernova will save your time by importing your Sketch Or Adobe Xd file, Select flutter as your export platform which will convert UI design into Production-ready Code.

Adobe Recently Released Plugins for Adobe Xd in Flutter Interact, which will Generate Code for Creating apps with flutter which is based on UI design in Adobe XD. this is Collaboration Between Google and Adobe that will be Expected to Released Early 2020. So Plugins will be Open Source According to Adobe.

pub.dev is a Command-line tools. A package manager that will make it easy for you to install and easy to use the dart libraries.the huge number of packages available at the pub.dev

Firebase is an Amazing tool for Every Flutter Developers, which helps us to Integrate on a flutter app & ship with the cross-platform app with ease. Firebase APIs are packaged into a single SDK so you can use it as your unified backend.

Scrcpy aims to Solve Developer Problem to make it easier for android device activities on the computer. and even it does not need any Data connection for using its service but connects over the USB cable.

DartPad is Online editor that Run Dart Programs directly into Your Browser and It Runs flutter Apps too. Which is Very Helpful, when you didn’t install the Flutter SDK into your Computer. 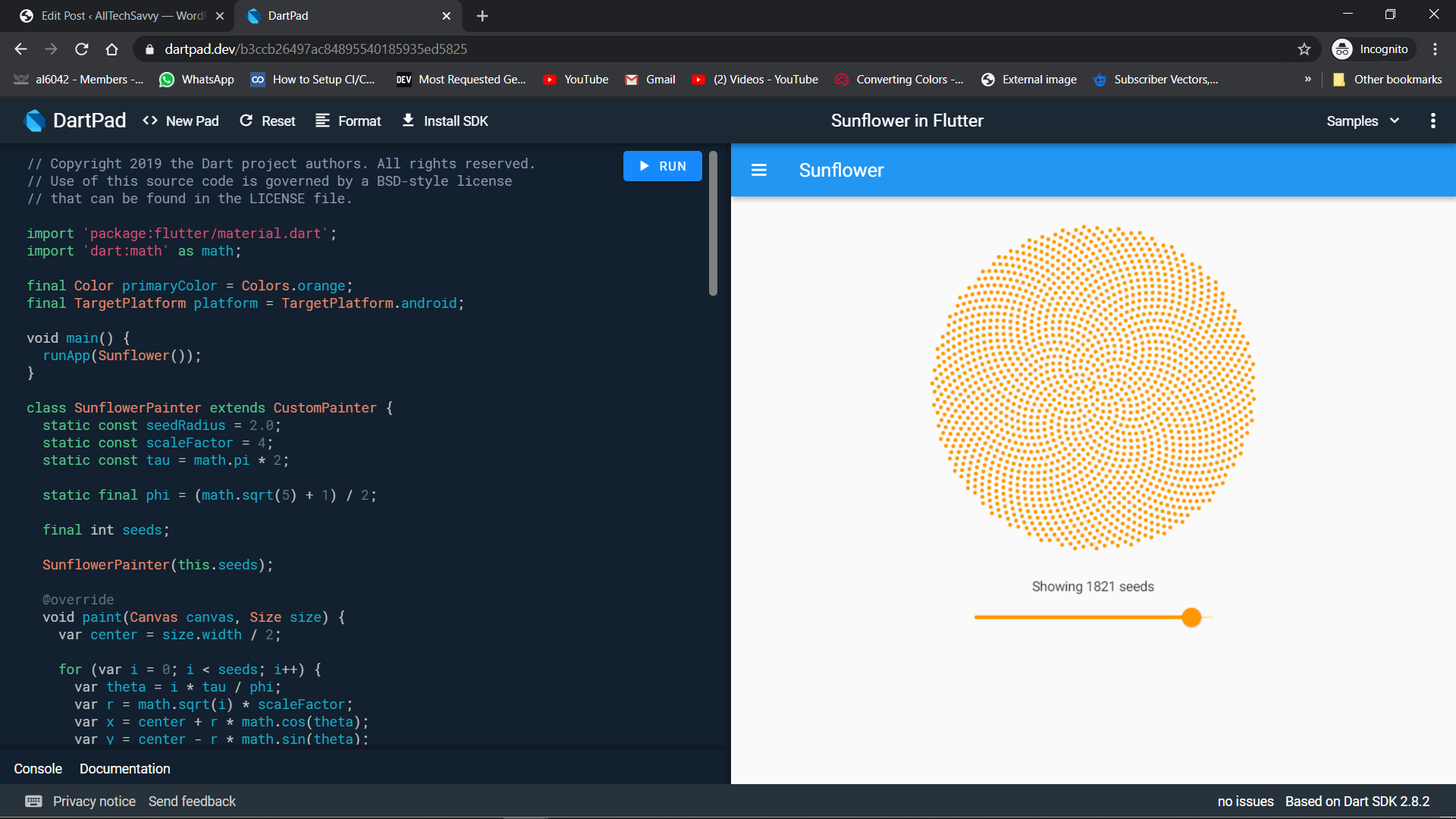 DartPad is a Open Source Project.you can Embed DartPad into a Pages like you see in the Codelab, Embedded DartPad is Very Good for Articles, & Tutorials.

Codepan Flutter editor is build on the dart backend services. that currently pors Dartpad which is Web based editor created by Flutter & Dart team that regularly update to support Flutter.

Below is the GooeyEdge Template. As you can see he flutter code is on the left hand side, Output is on the Right Hand Side. you can play with this type interactive design by dragging the edges with the Mouse cursor.

Rive is a Design tool that allows you to make Design Ui or character and even make that UI animate in the same tools. Rive work on real Assets that didn’t depend on Mockups. Rive allows you to load Rive files in your app or game.

Enjoyed the Tutorial? Please leave a LIKE 👍 to show your support For Hardwork

💬 If you have a question about anything in the Tutorial, leave me a comment and I’ll do my best to answer your question.

Sagar Shende graduate from RTM Nagpur University with a Degree in Computer Scinece having several years of industry experience, working as a Mobile app developer. In these years he has gained experience in iOS and Hybrid App Development using SwiftUI and Flutter. Also have working knowledge of API services like JSON, REST, Data Structure and Algorithm’s.

How to use WebView in Flutter app | Flutter Tutorial

How to implement Rewarded Video Ads in Flutter

How to Integrate firebase into Flutter app

How to Implement an Animated Gif Dialog Box in Flutter

This website uses cookies so that we can provide you with the best user experience possible. Cookie information is stored in your browser and performs functions such as recognising you when you return to our website and helping our team to understand which sections of the website you find most interesting and useful.

Strictly Necessary Cookie should be enabled at all times so that we can save your preferences for cookie settings.

If you disable this cookie, we will not be able to save your preferences. This means that every time you visit this website you will need to enable or disable cookies again.